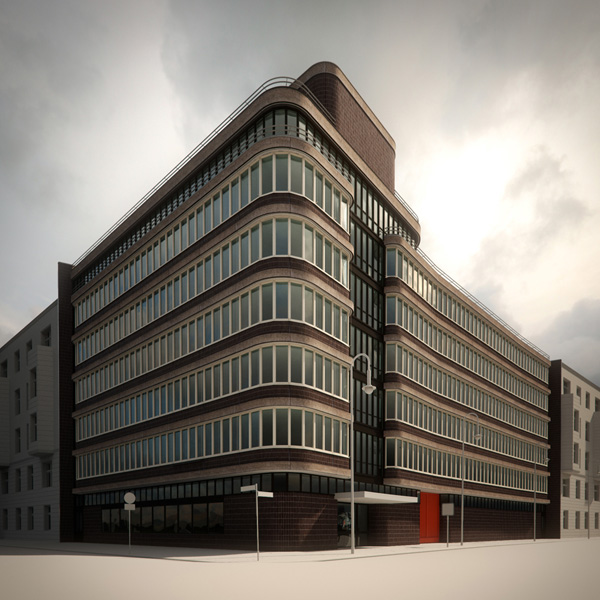 I was alerted last week to the existence of RailClone, a new 3ds Max plugin for parametric modeling by ItooSoft (the makers of the excellent ForestPack) by a new challenge on Ronen Bekerman’s blog .

I decided to have a look at it and, more specifically, to see whether the free version of the plugin, RailClone LITE, could be used to model entire facade elements. I had in mind the WBM building in Berlin, which I’d wanted to model for some time without really knowing how it could be done in a time-efficient manner.

This is what I ended up with and I must say I’m very impressed with RailClone. Check the rest of the post for details about the workflow for this. The following collage should be self-explanatory…

If not, here are a few words of explanation:

I started with a satellite photo and derived four splines from the outline of the building, corresponding to four profiles on the facade.

Then I isolated an modelled four facade elements. Using RailClone Lite, I swept some elements along the splines, completing about 80 per cent of the building this way. The results were extremely predictable. In order to make the elements fit exactly the facade’s original layout, I translated them on the x axis for fine positioning.

I set up my materials before plugging the facade elements into RailClone for sweeping. The modelling and texturing were based on a large number of photos of the building I’d shot. I used Materialwerk’s Brix plugin for the brown tiles.

Finally, I added some additional detail (some windows, the ground floor wall, etc.), some entourage, set up my lighting rig and rendered.

This could have been done with the basic Max toolset, or with other plugins, but not nearly as fast and probably not with the same degree of accuracy. Since RailClone is parametric in nature, bear in mind that the building could at any time be modified just by tweaking the splines. And given that RailClone LITE is free, there really is no reason not to make it part of your workflow. Make sure to check the pro version of the plugin, which includes the possibility to work on non-flat splines (think complicated spiral staircases done in minutes!) and to animate the results.

3 thoughts on “RailClone LITE for buildings”