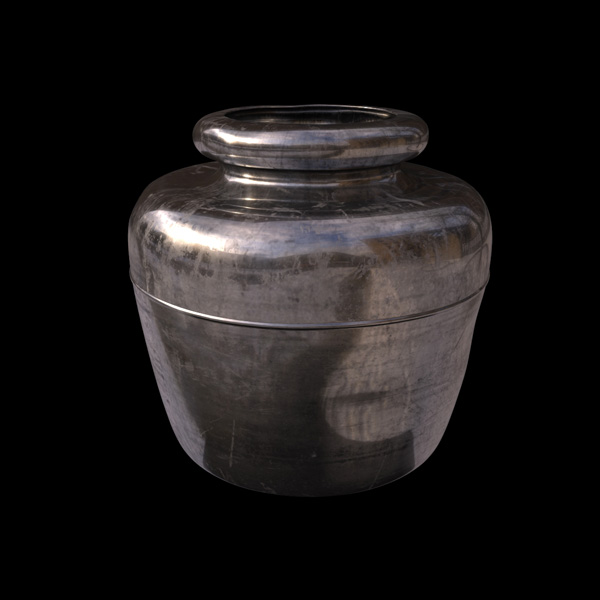 There are many types of metal, many uses for it, and thus more than one way metal ages. Here, I’m picking a few arbitrary examples and how I would go about recreating a specific look in 3ds Max and Vray, using an object modeled for my Haussmann series and a more complex material than those I went through in the first Materialism post. While this shader is object-specific, it may yield a few general principles to be applied to a range of metals. The render above shows the final result.

First two references, including a very bad Ipad photo I just made of a vintage kitchen ustensil. Here are a few things we can pick up here:

Trying to map things a bit before getting stuck in, this suggests we will need at least four layers:

Now, these layers will blend in a different way. 2, 3 and 4 will be overlayed over each other, with each new layer letting the layer below show through. Layer 1, on the other hand, will appear only where the metal has peeled off or been scratched. In other words, it will reside at the bottom of the stack of physical layers in the object and let no other layer pierce through below it. In shader language, this means that it will have to reside above all the others, using a contrasted opacity map to govern where it appears.

This is how the object appears in the viewport. It is not the best unwrap in the world, with quite a bit of distortion around the “neck” of the vase. But it will do here. The image shown here is the map that will appear in the diffuse channel of all the VrayMtl. Let’s start with the first layer of MetalBlendMat (layer 2 in the list above), which will deal with the mirror-like part of our metal: This one is a very basic Ward shade.

It has the darkish base-metal bitmap in the diffuse. The same map is plugged into three different ColorCorrection maps and lightened considerably. One of them goes into the the Refl.Gloss. Channel with a value of 1% (hardly any glossiness at all). Two versions, one slightly darker, go into a falloff map, which is itself plugged into the Reflect Channel (100%). This is not strictly necessary but will make the object slightly more reflective at grazing angles, like a Fresnel effect but very subtle and easier to control.

Here are the structure and the settings for this layer: This is a less “metallic” layer. I left it as a default Blinn shader. It uses a lightened version of the base layer in the diffuse; the same map as Layer 2 in the Refl. channel, but with only 30% opacity (meaning the white-ish diffuse layer will “show” through more); and a darker version of Layer 2’s map in the Refl.Gloss. channel, a 30% opacity (much glossier reflection). Neither falloff nor Fresnel effect here. Again, I’m using a Ward here. In fact, this is just a slightly modified version of Layer 2. The differences are: No Falloff in reflection and the Reflect. map at 80%. The Refl.Gloss. map is a new, high-contrast bitmap that gives a rougher look to the glossiness channel (see map below) at 9%. Anisotropy is set at 0,5 (quite subtle) in the Z axis, using the object’s UV coordinates. Now let’s see how these three layers blend together in the first Blend Mat (MetalBlendMat) below. Notice the “scale” stains and the way the reflection bleeds in an anisotropic way above and below the highlights (more visible around the neck of the vase). There is also this interesting mix of crisp and blurred reflections that we saw in our reference photos. By now the render is getting noticeably slower. As you can see in the settings below, I am just superimposing the mirror layer and the anisotropy layer using the default blend value of 100%, but the “scale” layer is on top of the stack and uses a new, high-contrast grey-scale bit map as a mix map, so that it is only visible in these areas where the “scale” or “grime” stains are visible. We are almost done. We only need the final dull-metal “base” layer (1), which, on the object, would be below all the metal layers and, therefore, in our final blend mat, will sit on top of everything else and bring the final worn-off feel.

Here is how it looks like applied on its own to the object: This is a Blinn mat, with a Fresnel effect applied, more akin to a plastic than to a metal, although it retains a certain reflectivity. The diffuse map is the same as for all the other VrayMtls (though duplicated here for clarity). This same bitmap is plugged into the Refl. and Refl.Gloss channels (100% and 50% respectively) via to separate ColorCorrection maps. All that remains is to plug MetalBlendMat and Layer1 into our FinalBlendMat using a new, high-contrast grey-scale bitmap to define where the scratches and worn areas would appear. Here is the final result again.

… and the object (with a slightly different shader) in context: Hopefully this will be useful for other types of materials, and not just metals. Some of these effects can be applied to vintage plastics and even glass. Alternatively, other types of metals can include additional layers, such as rust, at the bottom or the top of the stack. One thing to remember when doing this kind of work is always to start from a real-life example and deconstruct it in a logical way before translating this outline into Vray language.