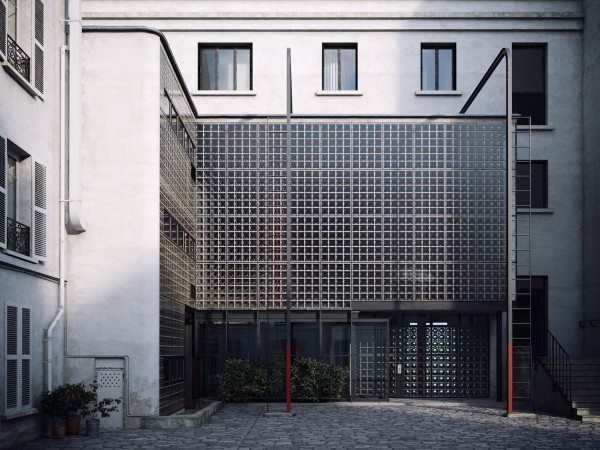 Finally a longer post after a few half-hearted attempts.

Thanks to a lucky combination of circumstances, I found myself with a bit of time in the past weeks and decided to use it for a slightly larger personal project. After considering and discarding several possible subjects, I had an email exchange with Peter Guthrie who suggested I try my hand at “La Maison de Verre”. Having pored over some references (I was lucky to find two very good books on this house, with lots of technical drawings), I decided to have a go at it. It turned out to be a lot of fun (I like my fun slightly tedious) as well as a bit of a technical challenge.

La Maison de Verre (“the glass house”) was completed in the early 30s by architect and designer Pierre Chareau. It is an interesting house (for instance in its repetition of certain sets of proportions, which is a boon for modeling) with a bit of a back story, which you can read more about here. It is located in the sixth arrondissement of Paris and is so well hidden that I realised when reading up on it that I had walked past it virtually every day for four years without knowing it was there. All of the furniture in this piece was modeled after Chareau’s designs with two exceptions: The dining table and chairs are by Jean Prouvé and the piano is a free model by QBAP. I wasn’t able to replicate Chareau’s choices of fabric for the sofa and armchairs so used a degree of poetic license there. Apologies to the purists. But otherwise, the quality of the reference material I found meant I could stay quite close to the original design of the house.

I was also inspired by a number of photographers in doing this, mainly by Francois Halard.

There is not much to say about this on the technical side as everything is pretty standard. The one exception is the rubber floor, which I built as a 2D-Array with Itoo’s RailClone 2. This is a great tool to (among many other things) arrange relatively complex tiles or planks into large floors whose borders are defined by splines. Itoo has a few tutorials on this particular feature on their website right now, which are well worth watching. I also used the latest version of Mighty Tiles to make a herringbone glazed brick floor (which, sadly, does not really appear in any of the final images) and the cobbled courtyard outside.

The lighting is provided by a V-Ray DomeLight, using HDR skies by Peter Guthrie and CGSkies. Some of the interior renders have a softbox or two.

I wish I could say something about how to efficiently render so many difficult glass bricks (a relatively high-poly model of the original Nevada glass brick, instanced many times) in V-Ray, but all my efforts at optimising the material and the render settings only seemed to make things worse. So while some of these images rendered very fast (under one hour for some), all of those where the glass tiles are visible resolved extremely slowly. I used Brute Force and Light Cache for GI on all images (Irradiance Map + Light Cache did not seem any faster).

As always, your comments and criticism is much welcome. I’ll try to answer questions faster than I normally do.