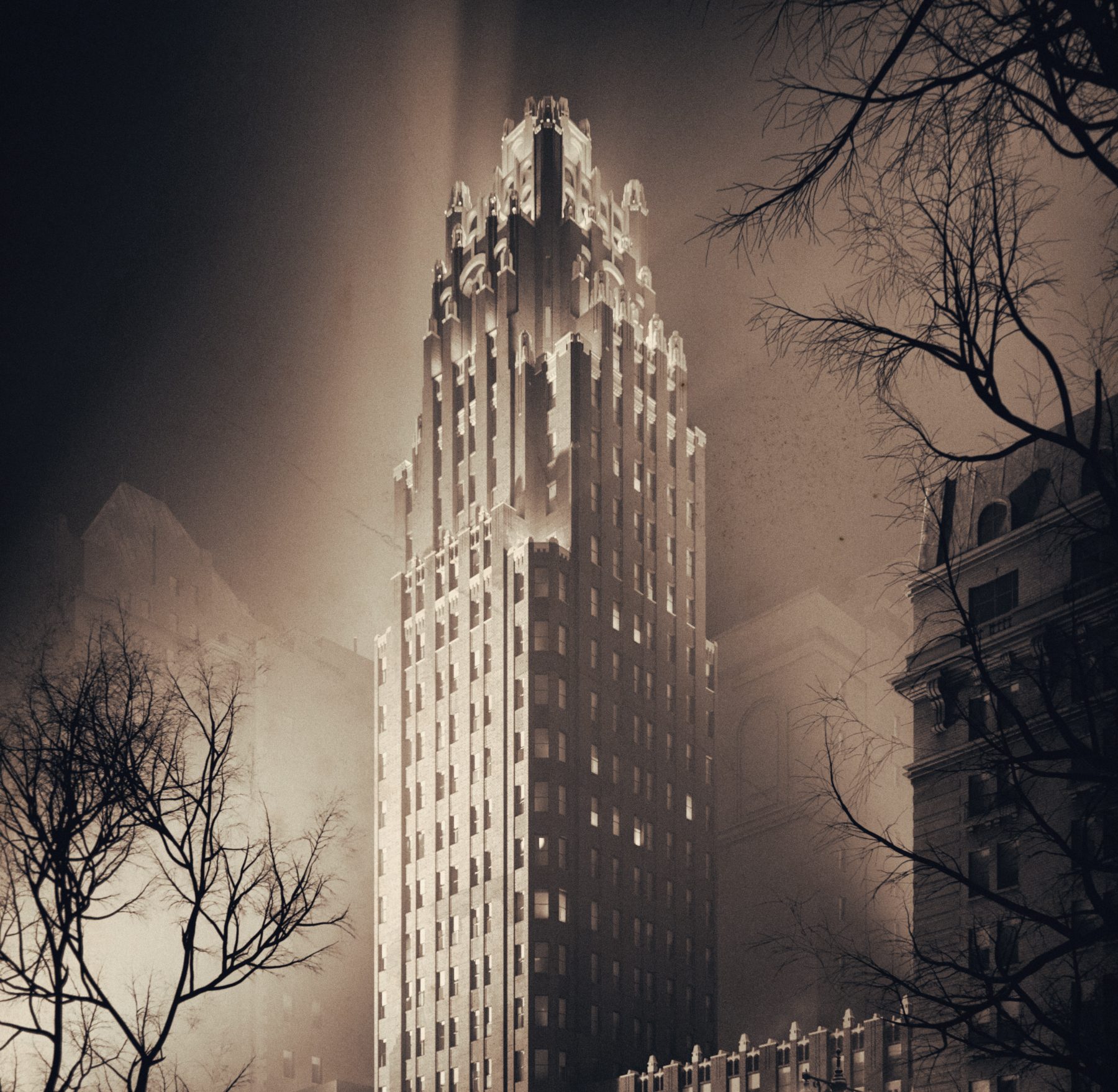 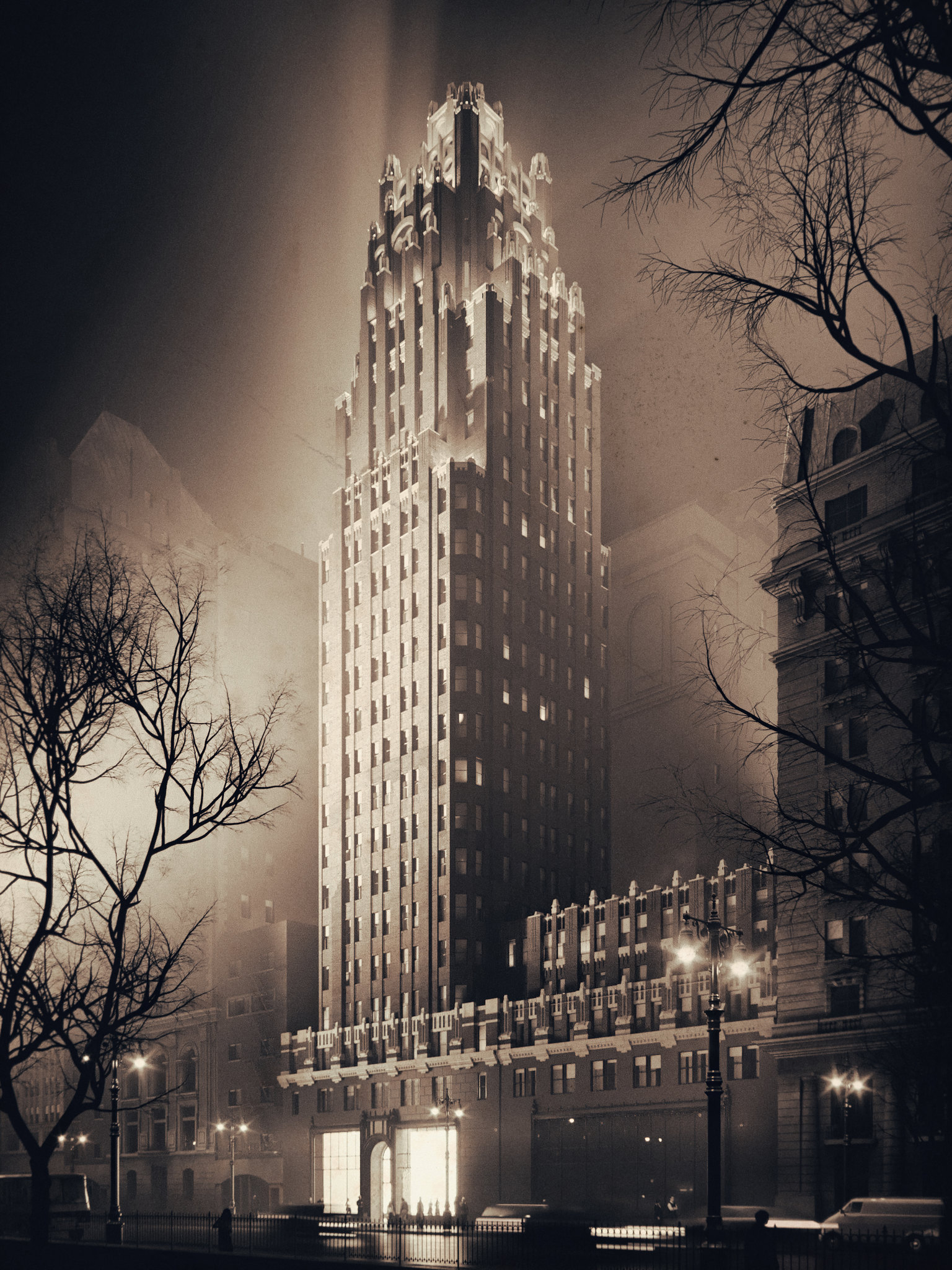 As long as I can remember, I’ve been fascinated by the architectural renderings of Hugh Ferriss, but I’d never thought of playing with the style in CG, perhaps because of my slightly obsessive focus on realism and the photographic style.

After a recent trip to New York where I gorged on Art Deco, I thought I might try to combine the Ferriss approach–monochromatism, high contrast, focus on artificial light, industrial-era chiaroscuro–and realism into a hybrid set of images both realistic and abstract.

I settled on the American Radiator Building (or American Standard Building) on 40th street overlooking Bryant Park as one of my favorite Art Deco skyscrapers. And since Ferriss provides the inspiration rather than a strict template, I decided to set the scene in the present day.

While the modeling aims for realism, the lighting is fantastical, with impossible floodlights and gigantic invisible light boxes used to direct the eye towards the point of interest. Heavy fog provides an equivalent to Ferriss’ use of selective blurriness and empty space to channel the viewer’s focus. The day picture (see below) is a lot simpler in its setup, with one sun shining through a cutout plane and illuminating only the top of the skyscraper as the rest fades into penumbra.

This, by the way, is Hugh Ferriss’s own rendering of the very same building, taken from his book “The Metropolis of Tomorrow”. Untypically for him, it is a daytime image.

As this was a relatively quick exercise, the modeling here was very economical, which much of the attention focused on the Radiator building. I used third-party assets for the cars and people to dress up the bottom of the image. Untypically, I almost didn’t unwrap anything, texturing the buildings instead with a mixture of triplanar maps and camera projections.

Technically speaking, this is all 3ds Max for the modeling (with a big help from Itoosoft’s RailClone to randomize the windows) and V-Ray Next GPU for rendering. Post work was done in the now defunct ArionFX and Affinity Photo.

The Youtube video below shows a quick making-of through a collage of test renders and a short walk through the 3D scene.

A shout-out here to ArchViz wizzards Hrvoje Čop and Mike Golden. When listening to their hilarious, fascinating and super entertaining new podcast, I realized Mike and I shared a passion with Hugh Ferriss, which Mike, who is incidentally head of 3D at Kitbash3D, has explored in much greater depth in his own work.

As always, very keen to hear your thoughts on this. 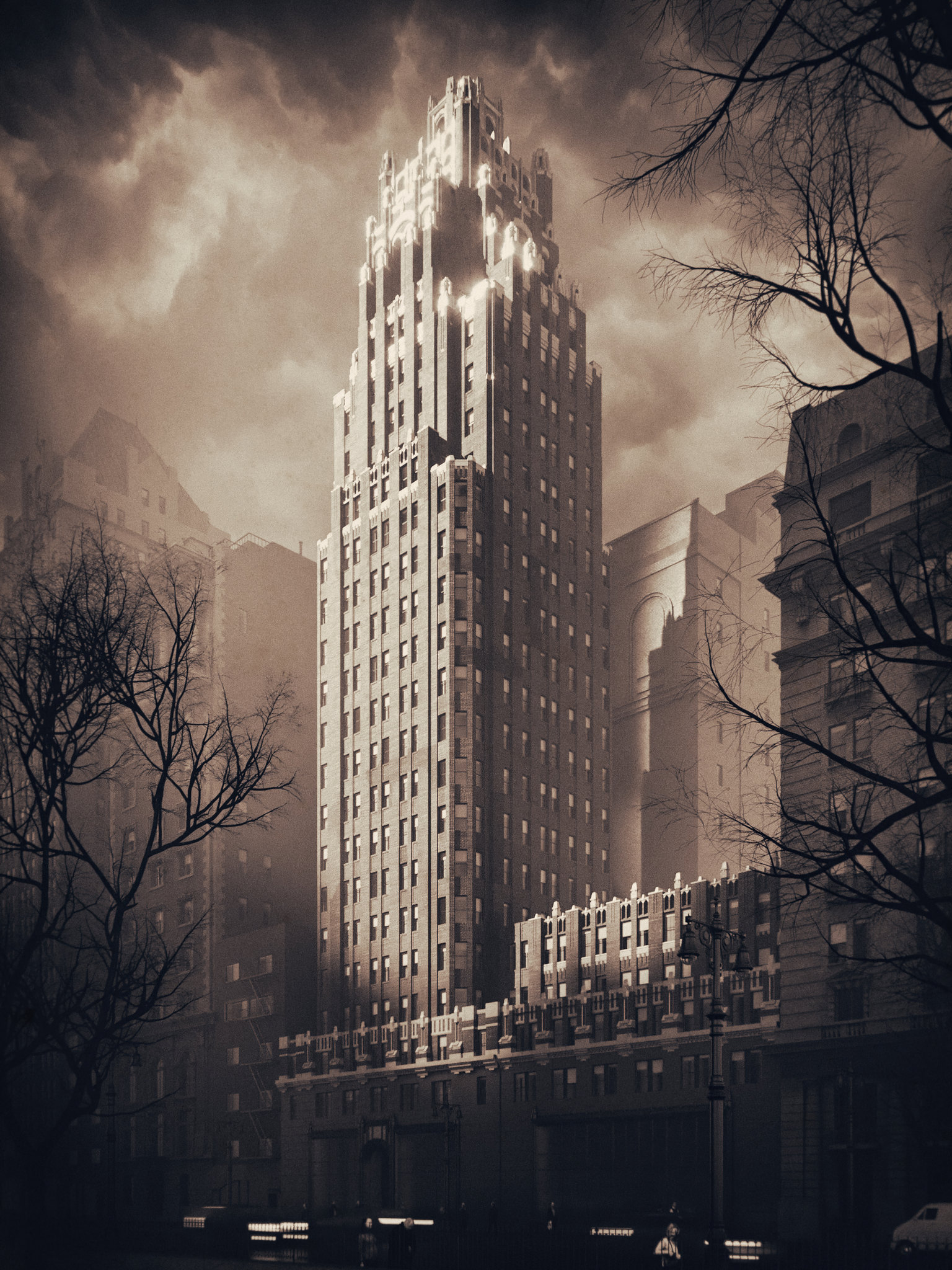