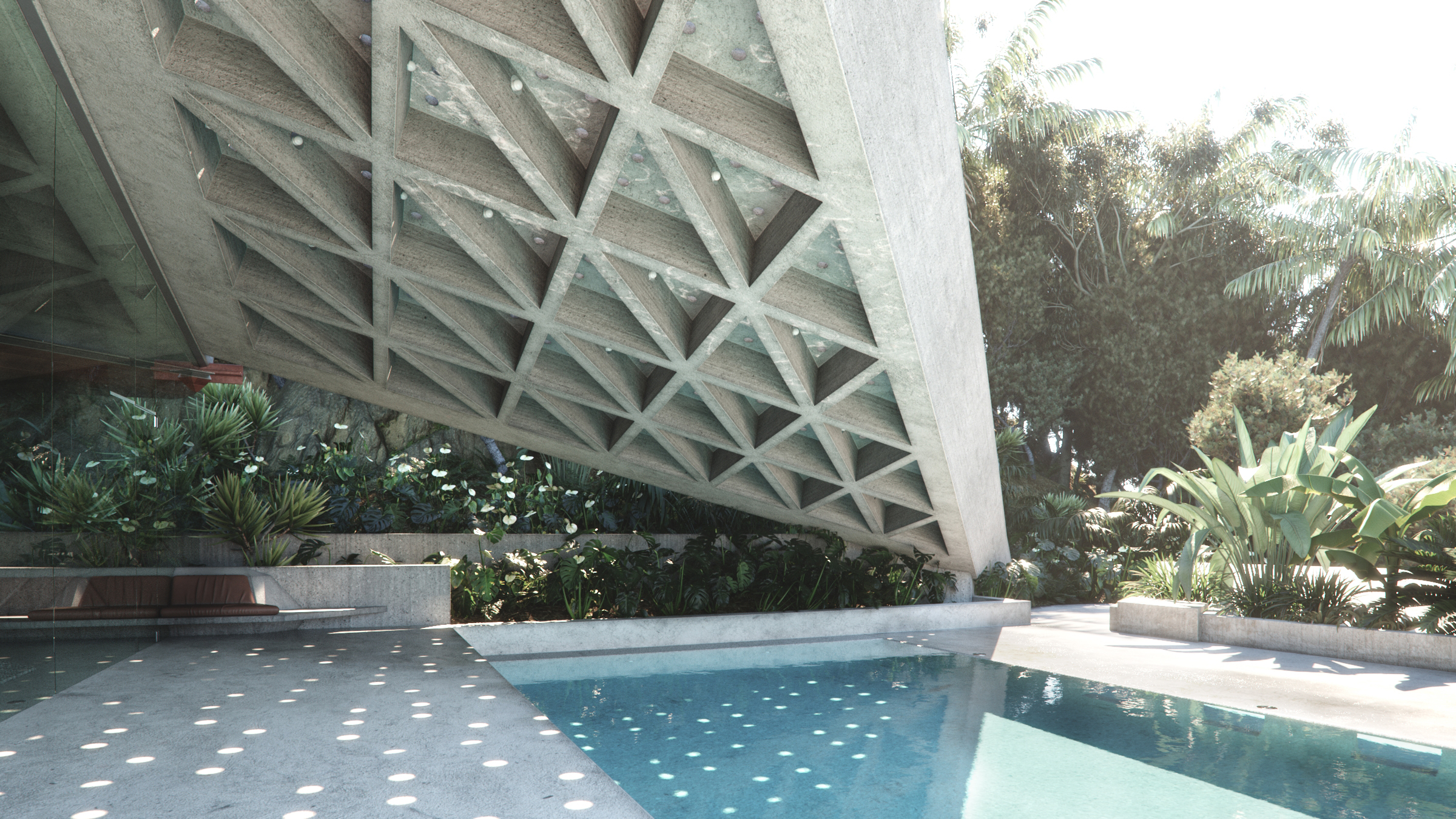 It’s been a while since my last reconstruction of an existing building. But this one turned out to be a lot more complicated than most of my previous picks. I’ll get to why shortly but first, a few lines about the building.

Cinephiles may know it as one of the most iconic locations in The Big Lebowski. In the real world, the John Lautner-designed house is the property of James Goldstein, who recently bequeathed it to the Los Angeles County Museum of Art. It was first built in 1961 but was significantly–and almost continuously–altered by Goldstein, working with Lautner, after he bought it in 1972.

It’s a daring design for the 60s. And the near absence of a 90-degree angle is what made it so hard to model (a lot of time spent working in local coordinates). There aren’t that many good blueprints around either, but luckily, the house is very well documented in photographs, which provided invaluable clues for the project.

It’s not a complete scene by any means. The lower floor with the bed and the photogenic deck overlooking the LA skyline is entirely missing. So is the car deck at the back of the house and most of the living quarters behind the kitchen.

Because of the scale of the building, I had to take some shortcuts, for instance texturing most of my assets with triplanar, dirt and distance maps rather than UVing everything as I normally tend to do. Most of the vegetation is roughtly eyeballed rather than meticulously researched.

Working on the GPU, I had to keep a close eye on my poly and texture budget. But fitting what is a relatively big scene onto my two 2080tis (with NVlink) wasn’t much of a problem. Apart from some camera angles featuring particles with motion blur, everything rendered without complaint.

All the vegetation was done from scratch in GrowFX. The rocks and natural features were photoscanned from nature, and the furniture was modeled in 3ds Max, Marvelous Designer and ZBrush. The carpets were done with ItooSoft’s RailClone and the vegetation was scattered with Forest Pack, using the hand-painting tool. The daylight shots are lit with a V-Ray sun/sky system and the evening ones with a Peter Guthrie sky.

V-Ray did a great job rendering these quickly (under an hour per image at 2k). I only missed the availability of the volume material on the GPU, which would have helped a lot with the pond water in the patio. I also wish we had Corona’s caustics for the pool.

Below a few more shots. Feel free to comment and ask any question.